I watched in admiration as our technical cosplay judges at this year’s Salt Lake Comic Con actually got up out of their chairs and walked around to the front of their table to touch and get a closer look at the costume details of Hiccup and Astrid, made by Jeremy L. Bird and worn in the competition by her (yep, her name is Jeremy) son Ryan and his girlfriend Janessa. Their costumes were definitely amazing, taking 1st place in the Intermediate category. 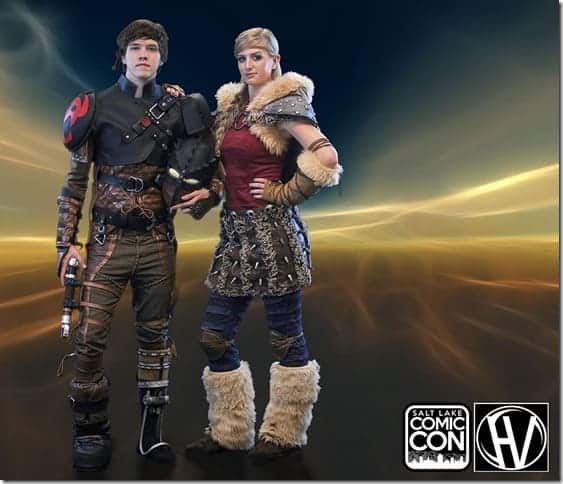 It had been a long stretch that day, overseeing the preliminary cosplay adjudication, the cosplay first aid station, the stage show and competition, and watching our judges’ polite and helpful interactions with sooo many contestants- most of these interactions made from from behind their table, in seated positions. The materials used in Hiccup’s costume, Jeremy said, only cost $150, but as all the judges agreed, the work featured the use of some expertly cut and assembled bleach bottles, sculpey and an assortment of repurposed fabrics and household materials she’d expertly put together in a faithful, realistic replication of the character. 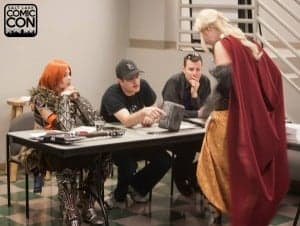 Raw materials in our current era of personal cosplay can be costly sometimes, but the cosplay artisanship itself tends to be more rewarded or appreciated than the value of materials used. If someone uses pure gold in a costume’s armor or a skin that’s inexpertly crafted or rendered, who cares? But if someone fashions a silk purse out of a sow’s ear and it has gorgeous workmanship, the item gets great kudos and big attention from admirers and cosplay judges alike. What we’re presently witnessing parallels the historic economy of materials and artisanship plus raises that timeless “art vs. craft” question as well as the question of value. Consider what young Juan says in one of my favorite novels, Heinlein’s Starship Troopers, about Mr. Dubois, his high school ethics instructor:

He had been droning along about “value,” comparing the Marxist theory with the orthodox “use” theory. Mr. Dubois had said, “Of course, the Marxian definition of value is ridiculous. All the work one cares to add will not turn a mud pie into an apple tart; it remains a mud pie, value zero. By corollary, unskillful work can easily subtract value; an untalented cook can turn wholesome dough and fresh green apples, valuable already, into an inedible mess, value zero. Conversely, a great chef can fashion of those same materials a confection of greater value than a commonplace apple tart, with no more effort than an ordinary cook uses to prepare an ordinary sweet.

“These kitchen illustrations demolish the Marxian theory of value – the fallacy from which the entire magnificent fraud of communism derives – and illustrate the truth of the common-sense definition as measured in terms of use.”

Dubois had waved his stump at us. “nevertheless – wake up, back there! – nevertheless the disheveled old mystic of Das Kapital, turgid, tortured, confused, and neurotic, unscientific, illogical, this pompous fraud Karl Marx, nevertheless had a glimmering of a very important truth. If he had possessed an analytical mind, he might have formulated the first adequate definition of value … and this planet might have been saved endless grief.”

I sometimes use that quote above during public presentations when I talk to producers and corporate people about what’s actually involved in designing and building costumes for films and events, but I can’t claim it’s something most people really get, unless they are also skilled- very skilled and accomplished at some sort of trade. They probably didn’t get the same level of indoctrination as I did with Marxism in college. – Yeech.

Anyhow, artisanship didn’t always outweigh the value of raw materials in all trades, though, and the idea of a painting is, historically, a newer one. Arguably, our contemporary idea of a cosplay has evolved on a somewhat parallel path in terms of how a costume is situated in public or private space, as well as the materials, expenses and talents behind these works. M. Anna Fariello details the shift in perception and commodification of art and artisanship during the renaissance in an excellent essay, “Regarding the History of Objects,” in which she reminds us that painting evolved in response to specific economic social forces. In the renaissance, Fariello says, those not born into aristocratic families could now buy class.

The development of a merchant class, combined with a wider acceptance of secular humanism, allowed individual wealthy patrons to commission personal portraits, which, in turn, became tangible symbols of their wealth. To accommodate a patron’s desire for a personalized and portable status symbol, artists adapted methods used to create traditional wood altar-pieces to a smaller format, the painted panel. Thus, the idea of a painting was born. (10)

The expansion of the merchant class changed everything.

The exploding popularity of cosplay in our highly mobile, commodity-hungry population mirrors this now.

The idea of portability is key and one can purchase or make the trappings of class for him/herself. A costumed person is a self-contained, mobile unit, and any painting on a wood panel travels better than a permanent fresco or painted ceiling. A renaissance family who buys that painting on a board can still display its status, even if it moves across town to another villa. Even if it’s a religious triptych of three images hinged together, the message is mobile.

Example of a hinged triptych by Hans Memling. A triptych is mobile propaganda, designed for a community’s learning and moral edification. It could travel to poorer churches way out in the boonies – to churches that maybe couldn’t afford to commisison artwork of their own.

Historically, costumes, too, have stepped off the traditionally more stationary, pious, elevated stages of church steps and naves into secular theater spaces, public arenas and streets. We may be enjoying a renaissance now of 1960’s “happenings,” given the spontaneous performances you witness at any convention. Dramas communicated through costume, though, are still largely propagandistic from the top-down but they also work from the bottom-up, meant for the social programming and moral conditioning of whole populations. Now costumes are out there on secular occasions and convention floors and the individual cosplayer or costumed performer has become the buyer as well as the salesman. Cosplay artisans purchase their own class and status while simultaneously pitching the intellectual property belonging to corporations ranging from DC to Disney.

Fariello describes how prior to the 15th century, materials were typically more expensive than the artist’s time, talent, or the painting process itself. Substances such as gold, lapis, rare pigments and chemicals could be hard to come by, plus they were expensive and difficult to process. Guilds heavily guarded their secret formulas and manufacturing processes for making things like pigments and glazes (8).  In the 14th or 15th century, a patron commissioning a new painting might indeed pay by the square foot, much like we’d pay for expensive slate flooring at the Home Depot today. The selection of which tile-layer should do the job might sometimes be a secondary consideration. Thus, many paintings created prior to increased availability of materials were typically commissioned only for permanent structures, churches, civic buildings, and public places. Places– that had most often held significant religious and cultural value.

Similarly, value placed on theatrical costume by guilds who staged elaborate mystery plays, religious in nature, followed these trends. The fierce nature of guilds’ competition with other guilds fostered a keen artisan eye and rigor related to dramatic staging and accouterments. One could say we’re seeing history repeat itself in the form of group cosplay, skits and multiple characters who compete together. Robert Huntington Fletcher’s account of medieval theater contains some interesting reflection about how simple, symbolic and suggestive most of the set pieces were compared to the costumes that were given great details, elevated priority, and they were even stored from year to year in expensive caches. He provides some bookeeping evidence:

“In partial compensation the costumes were often elaborate, with all the finery of the church wardrobe and much of those of the wealthy citizens. The expense accounts of the guilds, sometimes luckily preserved, furnish many picturesque and amusing items, such as these: ‘Four pair of angels’ wings, 2 shillings and 8 pence.’ ‘For mending of hell head, 6 pence.’ ‘Item, link for setting the world on fire.’ (110). 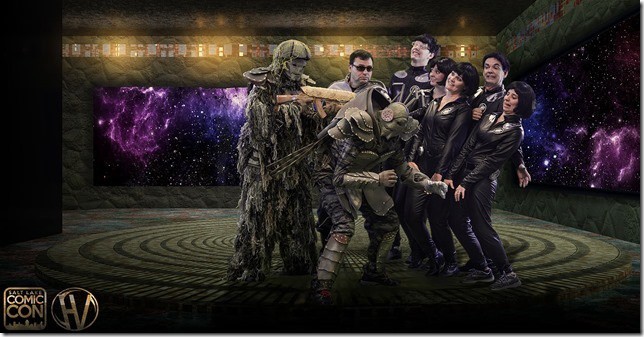 In performance parlance, we could say that the idea of a cosplay has fully evolved along with our current era of democratized technology, availability of inexpensive materials, but the message of the dramas are no longer super relegated to Christian themes or characters. We do publicly celebrate ingenuity and frugality- those great American values. An awesome Iron Man costume made from cardboard is impressive, but it’s even more impressive when the maker has skillfully used time-consuming techniques with bondo or woodfiller putty plus endless hours of sanding and expert painting to create seamless, reflective beauty so that the cardboard resembles shining chrome.

No longer in service to only religious dramas or even Hollywood icons, costumes have now and forever entered public space and now everyone can participate, purchasing or fashioning their own, even if what is usually being sold (the branded character) merely feeds back into the larger economic food chain. Guilds still form, compete and re-enact a new set of stories designed to teach our communities valuable moral lessons. But we are still being conditioned to display our status or talents while actively consuming and selling each other messages that during medieval theater used to come to us from scripture (and still come up in student essays about Spiderman’s big challenge to reconcile “great power with great responsibility”). And so it goes.